Ignore the Score, Run the Play 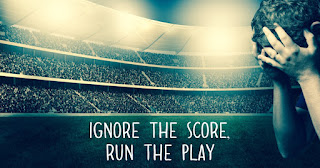 Jesus said to him, "Because you have seen Me, have you believed? Blessed are they who did not see, and yet believed." John 20:29


I'm reminded of a dear friend of mine,

Bob who lives in Alabama who shared

a story with me from his life that really inspired me.

He played college football and came to a place where he really disliked football.

the coach asked if he would assist. Bob was really hesitant to do it but he did

and their team was the worst team in the league and lost every game.

that had won every game they had played.

coaching. The first half of the game was just like you'd expect and their team

was getting really clobbered, 21-0. At halftime he sat with the kids and it just

came out of his mouth, "Ignore the score and run the play!

of winning the game. As he drove home that night the Lord spoke to him

and said,"I was talking to you Bob, ignore the score and run the play!"

The enemy is always trying to get your eyes on the scoreboard,(your

circumstances or difficulties.) He's always telling you to live by what you see

and trying to get you to believe a lie.

When I was sharing in the prison, one of the men told me that he didn't make

parole and his family is just falling apart. He said he is giving up!

I don't know where you are at in your life but I can't give up! There is nothing

for me to go back to because I've burned the bridge behind me. That doesn't

and setting the stage to do something supernatural. We just have to trust

When we do not trust God, it's because we don't really believe He loves us.

He not only loves us, He is orchestrating things in order to reveal His


also we have obtained an inheritance, having been predestined according to His purpose who works all things after the counsel of His will,  to the end that we who were the first to hope in Christ would be to the praise of His glory.
Ephesians 1:11-12 NASB

Special thanks to Bob McLeod, http://ourfathersarms.org/author/bobmcleod/

Posted by Circuit Rider at 3:42 PM